Among the many reasons to visit Tuscany we can not forget to mention its rich and polyhedric landscape. The beautiful coastline together with the Tuscan archipelago is one of them. The Isle of Elba is the biggest one and a private boat tour is the best way to discover its hidden corners. Elba will surprise you with its wild beaches and grottos along the jagged coastline. If you are lucky, you can even see dolphins on our Private Boat Tour on the Elba Island. Read more to discover our program.

*In case of cancellation for bad waves conditions, there is a 100% refund. Price can vary according to the number of partecipants.
** as private tour rates are in base number of people

The Tuscan Archipelago and the Elba Island

Elba is the biggest island in the Tuscan Archipelago. According to the legend, the several islands originated from Aphrodite’s necklace. While she was arising from the Tyrrhenian Sea and trying to reach Eros, she lost her pearls and each of them gave birth to a different island. The seven pearls of the Tuscan Archipelago are: Elba, Giglio, Capraia, Montecristo, Pianosa, Giannutri and Gorgona. To this national park (Parco Nazionale Arcipelago Toscano) belong also some smaller islands and cliffs like Palmaiola and Cerboli. With more than 60.000 sea hectars, it is the largest marine park in Europe. In addition, the islands belong to the Pelagos Sanctuary, a marine protected area established with the help of Italy, France and Monaco. However, each island differs from the neighbours and boasts unique landscapes and cultural-historical assets.

The Isle of Elba

As we mentioned, Elba is the biggest of the seven islands composing the Tuscan Archipelago. It covers an area of 224 square meters, representing also the third biggest Italian island after Sardinia and Sicily. Eight are the municipalities: Campo nell’Elba, Capoliveri, Marciana, Marciana Marina, Porto Azzurro, Portoferraio, Rio Marina and Rio nell’Elba. Its territory is mainly covered with mountains and hills. Mount Capanne is the highest peak with a height of 1.019 meter a.s.l. From the top you can enjoy a 360° view over the archipelago during clear days. Elba is a very nice destinations for hikers. For this reason we mentioned this territory in our article about the best day hikes and scenic walks in Tuscany. There are few flat areas in the southern side of the island.

Elba boasts a both land and marine rich landscape: more than 6 miles of sand beaches, 2.5 miles of gravel beach, and almost 2 miles of rocky coast suitable for bathing. The island is also rich in cultural heritage as a result of the many populations inhabitating these lands over the centuries. Both Etruscans and Romans took advantage of the big deposits of iron and appreciated the curative mud baths. The Republic of Pisa ruled the area as well and later the Medici‘s left trace of their power on the island with the fortified town of Portoferraio. The Spanish dominated the island later and Napoleon Bonaparte lived here 10 months after being exiled.

Private Boat Trip around the Island

Our Private Boat Tour on Elba Island is a nice way to discover part of this beautiful island with its unique lanscape, hidden caves and wild bays, sunken wrecks and small beaches.

During the trip there is a stop to swim and snorkel in a small bay before getting to Porto Azzurro, where you will have time to explore the colorful city centre and breath its maritime atmosphere. It is possible to include a light lunch onboard. Otherwise you can have some more time in Porto Azzurro to have something to eat in a typical trattoria. Our tour leader will recommend you where to go. After the visit of Porto Azzurro, we will board our motorboat and get to Lacona, where you will have the chance to swim and enjoy some time on the beach. We will then navigate back to Punta Ala or Scarlino.

In the deepest gulf of the Elba Island, that is actually only 3 km deep, you find Lacona Beach. With a 1200 m litoral of golden sand, this is the second longest beach on Elba. It is located on the southern side of the island and from there you can see another of the archipelago’s pearls: Montecristo.

Its original environment compared to other beaches on the island makes it unique. Some of the dunes are still intact and a special kind of lily grows in the area with beautiful white flowers. Lacona is ideal for both young groups of friends and families. In fact, it is possible to pratice water sports and children can enjoy the low waters next to the edge before it gets deep. The nearby pinewood and the conseguent natural shadows make the stay here very pleasant during the peak hours. In addition, this beach is also very well-equipped with bars, restaurants, hotels, water sport kiosks and beach resorts with beach umbrellas and sun beds.

Porto Azzurro is a very suggestive maritime town inside a harbor in the Gulf of Mola. Its name was actually Porto Longone but it changed to Porto Azzurro in 1947. Azzurro means turquoise and it fits better the turquoise tones of the bay when getting closer to this picturesque village.

There is a lot to see in Porto Azzurro from a historical point of view. The Spanish domination in the 17th century left here some impressive marks like the Longone Fortress (once called San Giacomo Fort). In addition, not far from the historical centre there is the Sanctuary of the Madonna del Monserrato. There the Black Madonna is whorshipped, like in the Montserrat Sanctuary in Spain.
The small piazza is surrounded by local shops and nice restaurants. Inside the city walls you can visit the baroque St. James Major Church with a structure recalling the typical Spanish baroque church.

Like all our tours, we can modify our Private Boat Tour program on Elba Island according to your wishes in order to best fit your neeeds. If you prefere, for example, we can make the tour longer, with the possibility to sleep onboard or to stay at a hotel ashore for one night. This way you can enjoy the island fully and in a more relaxed way. With more time at disposal, we could also circumnavigate the whole island and have more stops to discover other bays, beaches and, why not, sunken wreks like the Pomonte relict. You can find really many beaches along the Elba island coast. Have a look at the official website to discover all the other beaches.

There are no reviews yet.

Enjoy our Private SailBoat Tour to the 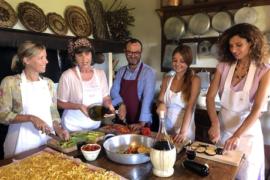 Cooking Class in a Tuscan Farmhouse - Tour from Viareggio, Versilia